British rapper, Wiley is reportedly being hunted for by police after failing to appear in court for assaulting an ex-world champion kickboxer and breaking into his flat.

The rapper, whose real name is Richard Cowie Jr, failed to show up to Snaresbrook Crown Court, east London, on November 11 last year.  And yesterday police issued a fresh appeal to find him.

The 42-year-old is accused of breaking into the home of friend and kickboxer Ali Jacko in Forest Gate, east London, on August 28, and smashing plates before assaulting the boxer.

The rapper’s November no-show came after he failed to appear at a hearing Thames Magistrates’ Court on September 27.

After that he released a video online, seen by The Sun, in which the rapper, who was awarded an MBE in 2018 for services to music, said: ‘The police, listen, me to you.

Newham Police has tweeted an appeal notifying the public that he’s wanted. 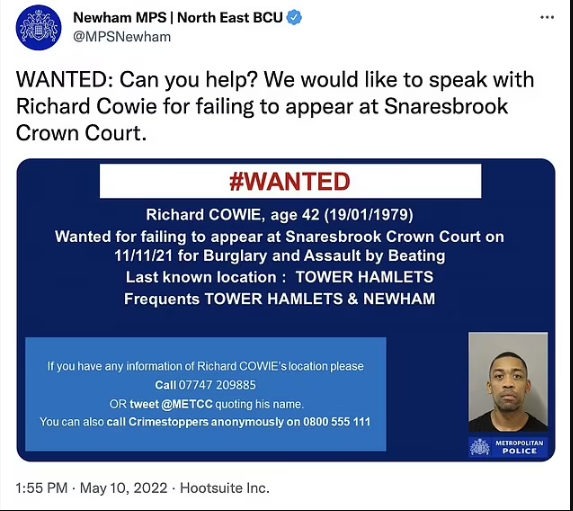 The rapper, from Poplar, east London, faces charges of assault by beating and burglary of a dwelling with intent to cause damage.

Mr. Jacko, a former world kickboxing champion, had been relaxing at his home with friends when Cowie Jr allegedly broke in, smashed plates, and assaulted him.

A friend of Mr. Jacko’s called the police after the situation escalated and a row allegedly erupted Cowie Jr, the self-proclaimed ‘Godfather of Grime’, was later arrested.

Cowie has previously been banned from Facebook, Twitter and other social media platforms after going on an anti-Semitic tirade in July 2020 in which he wrote: ‘I don’t care about Hitler, I care about black people’.

He also compared the Jewish community to the Ku Klux Klan. But it is believed he has since started a new Instagram account under the handle @wileyrecordsceo in which a video shows him asking for work and spending time with friends eating food.